Craft cocktail programs have popped up all over the world, from fast casual restaurants to large venue dance clubs, and consumers are craving these delicious libations. Unfortunately, they come at a cost.

A quality cocktail takes an average of 2-4 minutes to execute with hours of prep time beforehand in a well-designed bar, with a well-trained bartender. Bar Draught is your event’s shortcut to providing your guests with a craft cocktail experience at a fraction of the cost of hiring a fleet of mixologists, with the speed of draught beer.

The last thing you want for your event is for your guests to be excited about the drinks, but waiting 20 minutes to get them.

Traditional cocktail service is expensive, slow, inconsistent, and wasteful, not to
mention your customers’ wait time, which directly impacts their decision to order
more than one beverage.

Bar Draught solves all these problems by providing all-natural, draft-ready cocktail
mixers, designed to expedite service and prep, while providing the same consumer
experience as their more expensive and more timely counterparts.

How Does it work?

We have streamlined the craft cocktail process down to simple math. One bag of Bar Draught mixer PLUS one Liter of your spirit of choice EQUALS 22 craft cocktails. Bar Draught mixers use all natural ingredients and are shelf stable for up to one year with no refrigeration, and will keep for 30 days once opened. No specialty staff training is required. Anyone can execute craft with Bar Draught.

It couldn’t be easier.

We can also provide consultation on mobile draft systems or we can even modify existing draft lines. If you do not have draft capabilities, all Bar Draught mixers are also frozen machine ready or can be used in store & pours behind your bar.

Bar Draught is 100% REAL all-natural ingredients, with no preservatives or chemicals, that have been slightly pasteurized to eliminate pathogens and extend shelf life. Our mixers are shipped in a vacuum sealed bag to maintain freshness.

What is The Cost?

What are the current flavors?

do you create custom cocktails?

Customization is truly what every bar programs wants. Here’s our process:
From scratch custom flavors require a minimum order of 2 pallets (45 cases each). While there's no cost to create each custom mixer, more costly ingredients may require a price correction. Typically, it’s ready for sampling within 3 weeks, however, there may be delays for certain ingredients, due to on-going supply chain issues.

Slightly altered versions of current Bar Draught mixers, however, can be purchased with a minimum order of only 10 cases. For example, adding Strawberry to the Margarita mix, replacing the thyme in the Bramble mixer with basil, or swapping the bitters in the Old Fashioned mixer, etc.

All custom recipes begin with a collaborative discussion about what our clients are looking for. No cream, no eggs, and nothing “hot.”

Bar Draught is self-distributed across the nation. To place an order, simply contact us. Or fill out the order form online.

Please allow up to 2 weeks for orders to be delivered directly to your establishment. 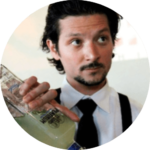 Adrian Verdin attended UNT’s School of Hotel and Restaurant Management on scholarship and opened his first restaurant at the age of 21. His passion for Latin American food has led him to thrive with his Crave Catering business, were he will do cooking classes, to large corporate functions from 100 to over 5,000 people. He also does freelance consulting for new restaurant startups.

Adrian owns a production company that specialized in food and beverage programming. Hados Entertainment has recently created a pilot based on the cocktail movement featuring world renowned bartender, Jason Kosmas as the host. 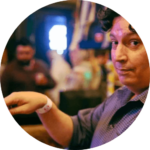 Born and raised in Texas, Nico Martini is a best-selling author of the 2018 release, Texas Cocktails and the 2021 release, Texas Whiskey (both with Cider Mill Press Publishing) and is the Co-Founder of Grayson Whiskey, as well as Bar Draught. He is also a regular contributor to American Whiskey Magazine. Nico has become a thought leader and innovator within the spirits industry and has presented at numerous events, including Tales of the Cocktail, San Antonio Cocktail Conference, BevCon, Catersource, Nightclub & Bar Show, The Bar Institute, Portland Cocktail Week and even a TEDx talk on cocktails.

Nico holds a master’s degree in Emerging Media & Communications from the University of Texas at Dallas, where he was a Guest Lecturer, teaching Digital Marketing Design and Self-Branding Through Social Media.

Prior to his transition to spirits, Nico worked in a variety of fields. He was a Program Director and afternoon drive for CBS Radio's Indie-verse 100.3 HD2 in Dallas, toured the U.S. with hippie jugglers, performed in wild west comedy shows across the nation, and is a member of the Lincoln Center Director’s Lab. He’s also the biggest Texas whiskey apologist you’ll ever meet and yes, Martini is his real last name.